In this page we'll learn about continuous compound interest and number e. Even if you're not much interested in finance, you may want to read on anyway, because here we introduce some important notions, specially number e and new ways of seeing the exponential function.

The principle behind continuous compound interest is present in many natural processes. It is a universal law that could also be called the law of organic growth.

This law applies when the growth of some quantity is proportional to the quantity that exists at the present time.

This type of rate is called organic because this is what happens in some circumstances in nature: the growth of an organism is proportional to the size of the organism.

We'll use the example of continuous compound interest because it is the most practical, and knowing this stuff can be useful in your life. In the last section of this page we'll also apply our definition of number e and the exponential function to calculate some limits.

Let's say you have 1$ in the bank. Your bank says that their rate is 100%, per year. This means that at the end of the first year, you'll receive 1 extra dollar. You doubled your capital, now you have 2$. This is how simple interest works. As its name says, really simple.

Your bank implemented a new, "fairer" policy. Before, you were paid your interest only at the end of the year. Now they pay you 50% interest per half-year. That is, after half a year, you receive 50% of interest calculated on the capital you kept from the beginning of the year.

Then, at the end of the year, you receive 50% interest calculated on the capital you kept starting at the middle of the year. Let's see how much you'll have after one year with this new method. Analyze the next diagram, where this quantity is calculated:

Notice that in the second line we factor (1+1/2) and we obtain a more comfortable algebraic expression. Now, let's say that your bank becomes even more generous and instead of just two payments a year, they pay 33% (one third) of interest three times per year.

In this case, after the two first payments you will have:

This is a very similar expression to the one before. Now, at the end of the year you get a third payment of 1/3 interest, so you finally end up with:

Theses cases give us the idea of what will happen if the bank makes n payments per year, of 1/n interest. The money you will have at the end of the year is:

This scheme is what is called continuous compound interest. And by the way, we arrived to the definition of number e. The limit above is exactly its definition:

This is an interesting way of defining a number. This number is defined as the amount of capital you'll have, after 1 year, by depositing 1$ into an account that pays 100% of continuous compound interest per year.

This number not only appears in finance, but in many other places. This is because the principle behind compound interest is a very simple and universal one: the rate of growth of one quantity at a specific instant is proportional to the quantity present at that instant.

Just to know, these are some approximated values of this constant: 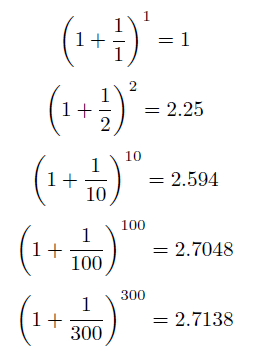 Notice that the limit converges rapidly to a fixed number. For example, the difference in the values for n=100 and n=300 is not that big.

Using the same ideas as in the previous section, we can not only define number e, but also the exponential function. If you analyze the calculations we did, you'll see that the 1 in the 1/n fraction in the definition of e is the initial capital:

If, instead of 1, we write x in its place, what we'll get is the amount of money we'll have with an initial capital of x dollars. Using an algebraic trick, we'll be able to show that this quantity is exactly the exponential function evaluated at x. Let's consider the expression:

When taking the limit as n approaches infinity of this expression, we get the amount we'll end up if our initial capial is x dollars. We'll make a change of variables. Let's define a number m as one that satisfies the following equation:

If m satisfies the equation above, solving for n, we can express it as:

Replacing the two previous equations in the expression we are analyzing, we get the following:

Using a basic property of exponents, we can write this as:

Now, we want to take the limit as n approaches infinity of the above expression. There is one problem, though, n is not in the expression on the right! We can get around this if we remember the definition of m. From the equation we used to define it, we can write m as:

This means that when taking the limit, it doesn't matter if we write n or m as the variable approaching infinity, because the two statements are the same. This allows us to calculate the limit of the expression to the right:

We can think of the x in the exponent on the right side as representing multiplying the expression on brackets "x times". This interpretation is correct when x is an integer, but not when x is a non-integer real number. Anyway, the property we need to use now is valid for any x, integer or not.

The property we're going to use is that we can "interchange" the order between the exponentiation and the limit operation:

When x is an integer, this is the rule for calculating the product of functions: the limit of a product equals the product of the limits. Now, what is between brackets on the right side is exactly how we defined number e:

With this, we can understand the expression e^x intuitively as the amount of money you'll have after one year of depositing x$ in a 100% continuous compound interest account. This is a fun way of seeing the exponential function.

The Exponential Function as a Series

We know that the exponential function can be expressed as a limit:

This means we can simplify the expression:

And we're left with:

Notice that the sum on the right side continues forever, it is an infinite sum. An infinite sum is called a series.

The same can be done with the exponential function evaluated at any point x. Using the binomial theorem as we just did, you can show that:

This expression of the exponential function as a series is so useful that many times is used as its definition. You'll learn much more about it and other series later.

Specifically, it helps in limits where there are expressions resembling the definition of e. Let's go directly to some examples.

Let's begin with a simple one. Let's calculate the limit:

What we do is to use the properties of exponents, and the fact that the limit of a product equals the product of the limits:

The two factors up there equal the definition of number e, so:

And this is the answer:

Here again we use some properties of exponents to write this expression in a way that will put number e in evidence:

What is between brackets equals number e:

And that's the answer:

To solve this one we need to make a change of variables. The idea is the as when we defined the exponential function as a limit. We can define a number y as one such that:

Here we used the fact that the limit of a quotient equals the quotient of the limits.

This looks somewhat like the definition of e, because the variable x is in the exponent. So, we are going to make a change of variables that will force this to look more like number e. We define y to be a number such that:

If we solve for x in the equation above, we get the following: 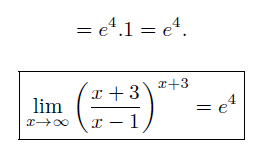 Go Back to Top of Page