The Graphs of Sin(x) and Cos(x)

The most important part of learning how to deal with trigonometric functions in calculus is internalizing the graphs of the functions sin(x) and cos(x). Let's construct the graphs of these functions, step by step. This is a simple construction that you'll be able to do in your mind every time you need to recall the graphs.

The value of the trigonometric functions for these angles can be deduced from the unit circle. We consider a circle with radius one, and a right triangle of hypotenuse 1 contained in it, as in the next picture: 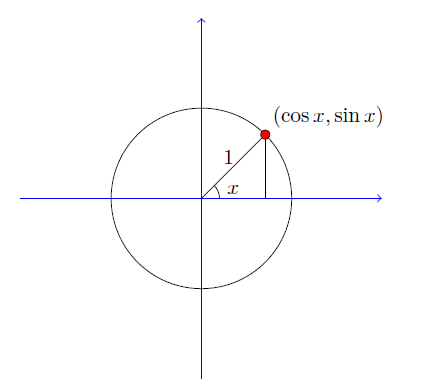 This means that we can deduce any value for sin(x) and cos(x) from the circle. First choose an angle x and consider the ray with angle x. Then, the intersection of that ray with the unit circle will have coordinates (cos(x),sin(x)).

In the next picture we see the points corresponing to the special angles:

From the picture we deduce the value of the trigonometric functions: 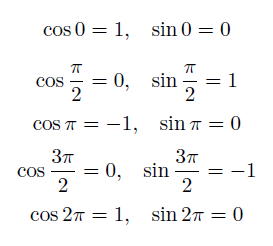 Let's begin to sketch the graph of sin(x). We can plot the points whose value we already know: 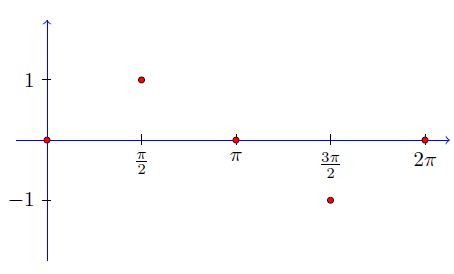 Now we just connect the dots to obtain the graph of sin(x): 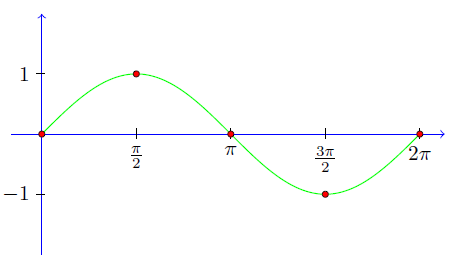 The graph of sin(x)

And we can do the same with cos(x): 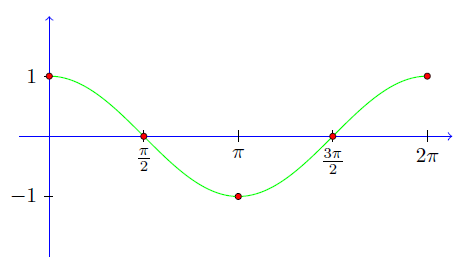 The graph of cos(x)

These two graphs are very important in calculus. It is very useful to remember them, or to know how to construct them. Remember, to construct them you only need to know the values of sin(x) and cos(x) at the special angles.

Calculating the Derivative of Sin(x) Graphically

Now that we know the graphs of sin(x) and cos(x), we can calculate the derivatives of these functions. We will use an intuitive graphical approach.

Let's draw the tangent lines to the graph of sin(x) at the special angles: 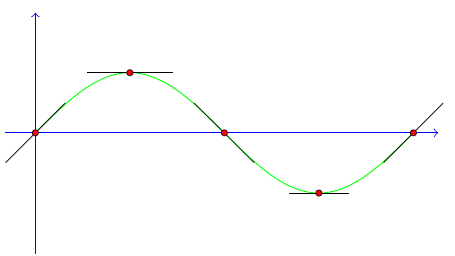 We need to calculate the slopes of these lines. The horizontal lines have zero slope. If we actually measure the slope of the first line to the left, we'll get that it has slope 1, because the angle it makes with the x axis is of 45 degrees. 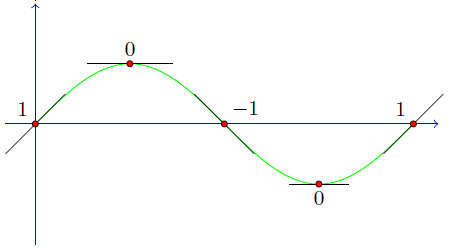 These are the slopes of the tangent lines

from our calculations of the slopes, we know the value of the derivative for the following points:

Compare this with the values of cos(x):

If we actually calculate the slopes at other points, we'll see that they all coincide with the value of cos(x). So, we conclude that:

The derivative of sin(x) equals cos(x). To remember this fact, just draw the graph of sin(x) (in paper or in your imagination) and the tangent lines at the special angles. You'll remember that slopes of the lines and that they coincide with the values of cos(x).

Calculating the Derivative of Cos(x) Graphically

We will follow the same process to calculate the derivative of cos(x). We consider the graph of cos(x) and tangent lines at the special angles: 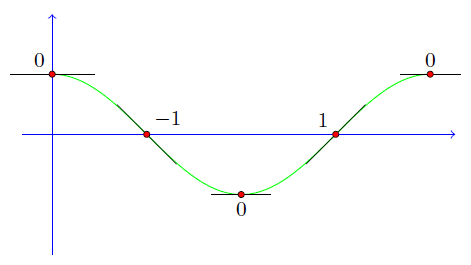 We have the following values for its derivative:

This looks somewhat like sin(x). In fact, it has the same values as the negative of sin(x):

We conclude that the derivative of cos(x) is -sin(x). That is:

Now that you learned these two derivatives, your next step should be to learn about the chain rule. So, go there now. If you already have mastery of BOTH the chain rule and product rule, you can read on the examples below.

Now that we know the derivatives of sin(x) and cos(x), we can use them, together with the chain rule and product rule, to calculate the derivative of any trigonometric function. Just to illustrate this fact, I'll show you two examples.

If you haven't yet learned the product rule and chain rule, you can skip these.

Let's calculate the derivative of:

According to the chain rule:

As we just learned, the derivative of sin(x) is cos(x):

Let's find the derivative of:

We know from trigonometry that:

We can also write this as:

Using the product rule we get:

And finally, this equals:

To see more examples of derivatives, spend some time in the solving derivatives page. There you'll find more complicated problems related to what we have learned so far.

What Other Visitors Have Asked

Click below to see contributions from other visitors to this page...