I'll talk a bit about what we mean by indeterminations. Let's take ∞-∞. To begin with, the expression ∞-∞ does not have any meaning, is like a meaningless combination of letters. However, we sometimes use it to express something quite specific.

Let's say we have two functions: f and g. And let's say that:

No general affirmation about the limit of the function f(x)+g(x) can be made. We may be tempted to write:

But this could be anything. Let's take the case of the functions given by:

The sum approaches positive infinity. Based on this example, we should write that:

However, if we take the functions:

In fact, we could use any conctant C instead of 1 in the definition of the functions. These examples show that there is no appropriate definition for the expression +infinity-infinity. Sometimes it could mean a constant, sometimes could be positive infinity or something else.

Now, for the case k/0, we could say that it is also an indeterminate form. However it is somewhat "more determinate" than the others. Let me explain what I mean...

You said that it could mean just two things: positive infinity or negative infinity. And you're right. That isn't the case with the other indeterminate expressions. For the others, the possibilities are infinite.

To be precise, what we can say about the expression k/0, with k>0, is just the following: 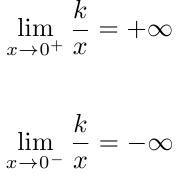 The expression k/0 itself does not have a unique meaning, however, we know that we're referring to some kind of infinity.

Join in and write your own page! It's easy to do. How? Simply click here to return to Your Questions About Limits.