Mathematical functions are the first things you need to understand to master calculus. Most people that take this subject learn how to solve problems like a machine, but do not grasp this essential concept.

So, first things first. What are we talking about here? In calculus, we study quantities that change.

Quantities that change are called variables.

In fact, almost everything in nature is a variable.

This is why calculus can be so fascinating and useful. It can be applied to any quantity that changes.

In nature, we not only see quantities that change. We also see that some quantities are connected to one another in some way.

For example, we see that it is hotter during the day. During the night it is colder. To understand better this connection between things we invented mathematical functions.

"If two variables are connected in some way, so that for each value of one corresponds one value of the other, we say that one is a function of the other."

It doesn't matter how that connection is expressed. As you'll see, a function can be represented by an equation, a graph or a table. 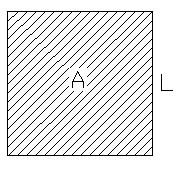 We know that the area of this square is:

Do you recognize what that means? It means that A is a function of L! That equation gives us the instructions to obtain the area, given the length of the side.

Mathematical functions that are defined by equations like this one are very useful. In fact, these are the functions we will mostly focus on.

There are many ways to express the same function, though. For example: 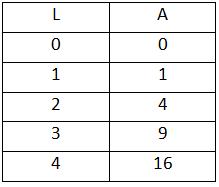 This table expresses the same function. We can even graph the function like this: 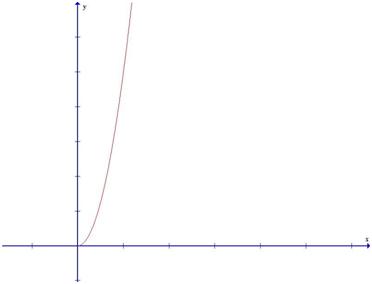 What am I trying to show you with these examples? That you don't need to know the equation that defines it. To have a function, the only thing we need is two variables that are related.

The Complete Expression of a Mathematical Function

The expression we give above for the area of the square is not complete. To know exactly what function this equation defines we need to know something else. Do you recognize it?

What will happen if L=-4? We can't have a negative length, but we didn't specify that on the equation. If we give that equation to a computer, it will "think" that it is also defined for negative values of L.

So, a more complete expression of the area function will be:

Although this is the correct way to express a function using an equation, we often don't put the second part. If there is no specification, it usually means that both variables can take any value.

To learn more about this, go to Domain of a Function: Understanding and Finding It.

Now I will introduce you to some notation. That is, how we write functions. In calculus we like to name the variables "x" and "y". When we have an equation that defines a function, for example:

This is only a convention. There is no reason why x couldn't be the dependent variable. But this is a useful convention.

In this case, we say that y is a function of x. We write this as:

These are the fundamentals of mathematical functions. To keep learning more, follow some of the following links.

These are the things I want you to leave with:

To learn more about functions:

What is a Function and How to Solve Simple Problems
Develop an intuitive idea of what is a function and learn how to solve problems easily. Many examples and exersices for you.

Domain of a Function: Understanding and Finding It
The idea behind the domain of a function is pretty simple, but it can be tricky to actually find them at first. Here we'll delve into the intuition and solve problems step by step...

Composite Functions Made Clear and Examples
Composite functions very rarely are explained properly, yet it is essential for you to understand them if you want to master calculus. Here we'll make them clear and do some examples...