The squeeze theorem espresses in precise mathematical terms a simple idea. In this page we'll focus first on the intuitive understanding of the theorem and then we'll apply it to solve calculus problems involving limits of trigonometric functions.

What is Pablo's grade? It is also B, right? You could say that Pablo's grade has been squeezed between Peter's and Mary's.

This is the idea behind the squeeze theorem. Really simple! Now, let's translate this into the language of calculus.

In the following video I tell the same things that are written in this section. You can watch and/or read below.

And we also have that:

That is, when x approaches a given number a, u(x) and v(x) have the same limit L.

The squeeze theorem says that given these conditions, we can say that:

z(x) has been squeezed between u(x) and v(x)! Here's a graph that shows this: 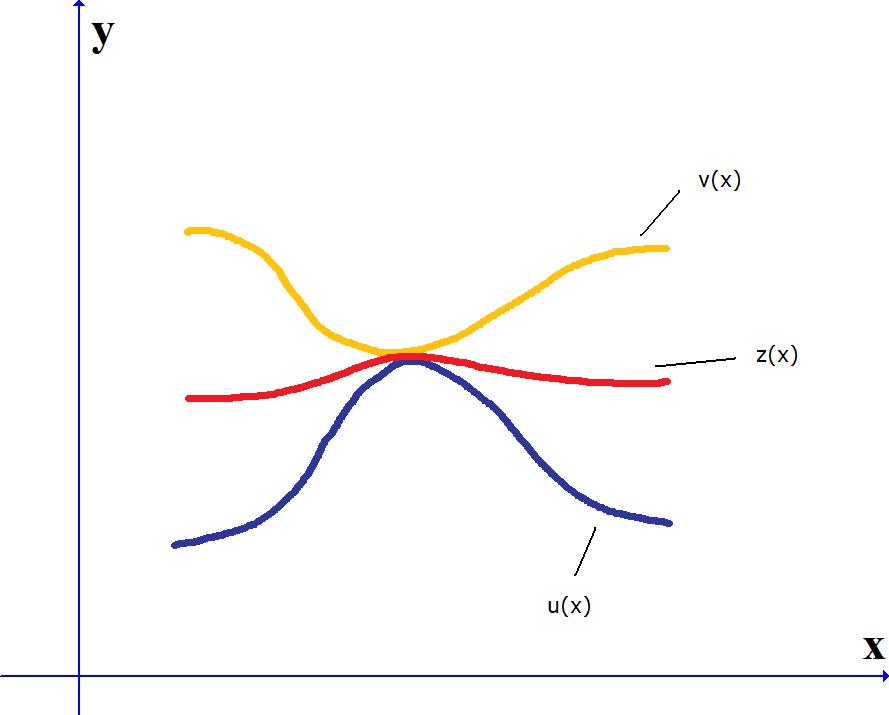 The point where u(x), z(x) and v(x) touch (or almost) is the point (a, L). Because z(x) is squeezed between the other two functions at that point, it also has to approach that point.

This theorem is actually useful to solve some limits. Let's see one of the most important applications of this theorem.

The Limit of Sin(x) over x

We will calculate this limit:

This limit is very useful, because it can be used to solve other limits that involve trigonometric functions. In the following video I develop the proof, that is also written below.

To begin, let's draw a circumference of radius 1 and a triangle, as in the next figure: 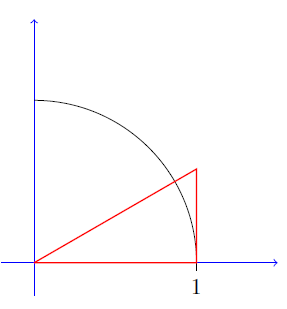 Let’s call x the angle in the triangle. We’ll also put names to the points and draw two extra lines, as shown in the figure below. 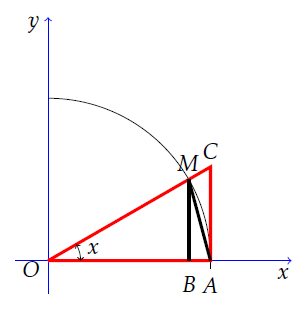 We will use this geometry to solve the limit.

First, let's note the following. The area of triangle MOA is smaller than the area of circular sector MOA. Look at the picture and try to find those.

Remember that the circular sector is like a slice of pizza. Look at the picture until you can see that the area of triangle MOA is smaller than the area of sector MOA.

Now, let's note that the area of sector MOA is smaller than the area of triangle COA. Look at the picture and try to find that.

Here we have an inequality. You start to see how we'll use the squeeze theorem?

Now, let's find the three areas. First, the area of triangle MOA. Its area is base times height over 2:

Now, what is OA? Look at our picture and try to find it. It is the radius of the circle. So, it is equal to 1.

Now, let's remember what is sin(x) in a right triangle. It is opposite over hypotenuse:

So, side MB equals the sin of x. Let's replace OA and MB to find the area of triangle MOA:

Now, let's find the area of circular sector MOA. A circular sector is like a slice of pizza. It is a portion of a circle. It has the same radius as the circle, in this case 1, and an internal angle x: 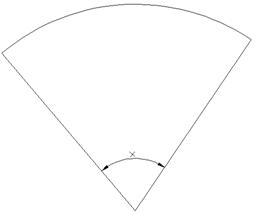 We know that a circle has an internal angle of 360º, or two pi radians. And we know that the area of that circle equals pi times radius squared. That is:

(Here the "=" sign means that the angle corresponds to that area, not that it equals it. For our purpose here we can treat it like a normal equal sign.)

Now, we can divide this equation by two pi:

And now we can multiply this equation by x:

This is the formula for the area of a circular sector with an internal angle x. So, in our sector MOA we have:

But the radius is one:

Remember what is the tangent in a right triangle? Opposite over adjacent:

So, the area of triangle COA is:

We now have the tree areas! Let's replace them in our inequality:

We can multiply the three members by 2 and the inequality holds. Let's do that, let's multiply by 2:

We also replaced tangent of x by its equal, sin(x) over cos(x). Now, let's divide the three members by sin(x). The inequality holds:

Let's say we have this inequality:

We can confidently say the following:

Let's use this property with the inequality we care about:

We just replaced the functions by the inverses, and changed the "less than" symbols with "greater than" symbols.

Now, we're ready to use the squeeze theorem! We will squeeze the middle function. We know that:

So, the middle function is squeezed. By the squeeze theorem, we know that:

Here's the graph of the function sin(x) over x: 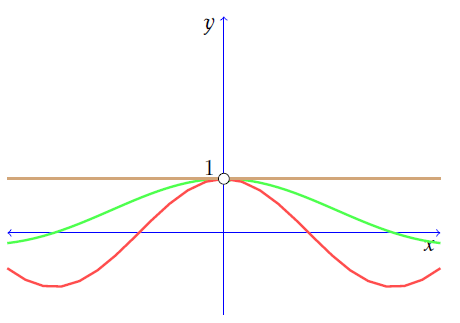 The figure above shos the three function to which we apply the squeeze theorem. The green function is sinx/x, the red function is cosx and the brown function is the constant function 1.

We can see how sinx/x is squeezed by the other two when x approaches 0.

This may seem a lot of work to prove a simple limit. But you'll see that this is a really useful limit. We will use it now to solve other limits involving trigonometric functions.

We will solve some problems involving limits with trigonometric functions.

I just rearranged the original limit a little. I replaced tan(x) by sin(x) over cos(x) and moved the x a little, so it looks like the limit we just proved.

If we just replace the x's by zero, we get 0/0! Let's look at our trigonometric formulas and try to find something that may be useful.

Let's remember the formula for the sin of x over two:

It looks a lot like what we have in our limit. If we square both sides and solve for 1-cos(x) we have:

Let's replace this trigonometric identity in our limit:

Now, we have a sin of something in the numerator and an x in the denominator. You should start to think how to use our dear limit we proved.

Keep in mind that what we proved in the previous section is the limit of sin(something) over something. The argument and the denominator don't necessarily need to be an "x". They can be any function, but they must be the same.

We need to have in the denominator the same that is in the argument of the sin function. So, we will multiply and divide the denominator by two. That doesn't affect the limit. We have:

You can just simplify the two's in the denominator and the limit stays the same. But now, what we need is to separate these expressions in a useful way. Let's do that and find the limit:

We took one two of the numerator out of limit sign and separated the squared sin in two. Notice that this expression equals the same as the previous one. Here we just use the result we've got in the first limit and replace x by zero in the second one.

This is a considerably "hard" limit. This is something you may expect to find in an exam.

Here's an easy one:

We just multiplied and divided by four. This is a useful technique in this type of limits.

We just separate the expression and use the result we already know.

The rule of thumb is: whenever you have a limit with trigonometric functions, and x approaching 0, you may try to use the limit of sin(x) over x to find the limit.

To put what you have learned into practice, you may consider purchasing The Calculus Problems Manual. This is a series of eBooks that contain the essential calculus problems you need to know how to solve. You'll practice with the types of problems teachers and professors like to put on tests.

What Other Visitors Have Asked

Click below to see contributions from other visitors to this page...

A Variation of A Trigonometric Limit

Here's a variation of a trigonometric limit. At first it may look quite different to what we've been doing: We just need to realize that it is …

Here's another example submitted by Steve. Here we use the same trick as the example above and use the fundamental trigonometric limit: …

Return from Squeeze Theorem to Limits and Continuity