What is a Function? A Simple Approach

There are many ways to understand what is a function. One way that is very useful is to consider it a rule, which given an input, gives an output. This way of looking at functions is very useful in calculus, and we'll be using it almost always.

What do I mean by a rule which asigns an output to an input? Consider a box, like the one below:

The functions we use in calculus are rules that relate numbers. So, in our case, the "x" in the box represents any real number.

You may already have an idea of what is a function after taking algebra. When thinking about functions you probably think only about numbers.

Don't think that functions are only about numbers. In fact, almost anything can be considered a function!

Here are some hilarious examples of functions. I saw Salman Khan from the KhanAcademy teach using them, and I found them very useful.

Let's say that I am a function. Let's study the Pablo function. In case you don't know, Pablo is my name.

What will happen if you give the Pablo function the input "food"? Let's see:

If you give me food, I'll output calculus pages!

Now, let's consider the "you" function. Let's give "you" the input "calculus pages":

You(calculus pages) = A's on your exams

You output A's on your exams.

This may seem convoluted, but is very simple. Let's replace Pablo(food) by its equal, "calculus pages":

You may or may not find these examples useful. I found them hilarious when I saw them.

They are useful to show what is a function and that they are not limited to relationships between numbers.

Let's do some function problems. Let's say that:

Now, let's a do a slightly more complicated problem. Until now, to design a function we've been using only the letter f, as in f(x).

When we have more than one function, we need other letters to name the functions. The favorites are "g" and "h".

In this problem we have three functions:

Here we have another interesting problem:

After doing the first one, this is easy:

Here's a little exercise for you: 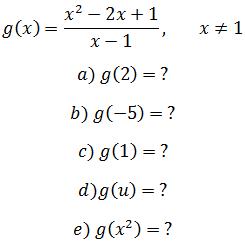 To learn more about functions:

Return from What is a Function to Home Page