Why Can We "Cancel Out" Differentials?

What allows you to cancel differentials, when you 'canceled' them out. Thanks!

This is a very good question, and I never had the chance to shed some light on this subject. This tends to confuse many students,
specially when they are told (as I did) that they can cancel out differentials.

Let's delve a little bit into what are differentials. Let's say we have a function f(x). And let's take two points, a and b. 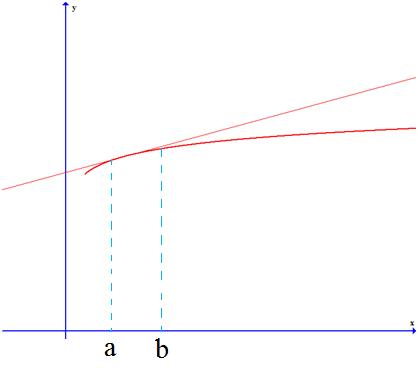 If we graph tangent lines, we can see that they are pretty good approximations to the actual function, at least at points near the point
of tangency. For example, at point a in the graph.

Remember the general equation of a line? It was like this:

There, k is the slope of the line.

We know this line has slope equal to the
derivative of the function, that's just by definition. So, that's the k in our equation:

We also know the line is equal to f(a) at point a. That is:

And that means that:

So, the equation of the tangent line is:

Now, let's say point b is pretty close to a, so we can assume the tangent line approximates the function f(x) reasonably well:

So, replacing in our equation these new symbols:

Or, to make this look nicer, let's use Leibniz notation for the derivative:

And we basically "proved" the rule that allows us to cancel out differentials. What's important here is that we took b very very close
to a. As close as necessary to make the approximation using the tangent line good.

In fact, this is not a formal proof, but I think it gives us the intuition on how differentials work.

Formally, we have that:

Where h is any number, positive or negative, and r(h) is the "remainder" function. This function is such that:

This means that as h becomes smaller, r(h) becomes even smaller than h (in fact, a lot smaller than h). And the differential of the
function f is defined as:

As h becomes smaller, the differential becomes a better approximation to the "change in f". This fact is used a lot in physics and
other sciences that apply calculus.

If that last "formal part" confuses you, just ignore it. What is most important is for you to get the intuition on why it is ok to
cancel out differentials.

Join in and write your own page! It's easy to do. How? Simply click here to return to Your Doubts and Problems.